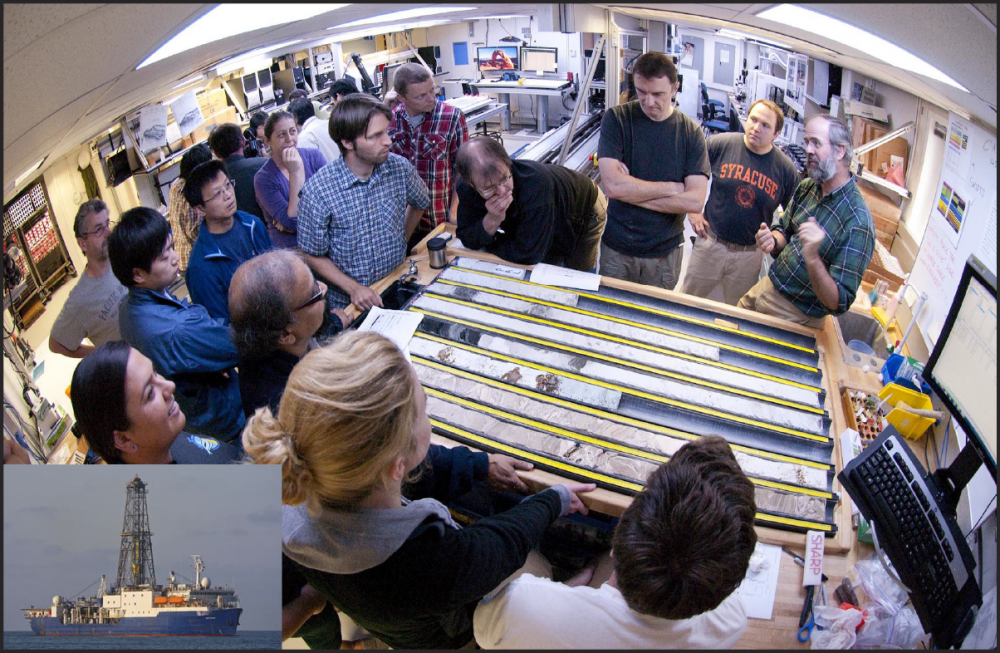 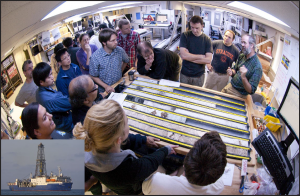 Part of the science party for IODP Expedition 342 “Paleogene Newfoundland Sediment Drifts” (gathered around the sampling table with the Cenomanian-Turonian boundary). Inset: The JOIDES Resolution on station. See http://joidesresolution.org/node/2492 for videos of our cruise.

In summer 2012, I (and co-chief, Paul Wilson) led IODP Expedition 342 to drill the SE Newfoundland Ridge—a set of sediment drifts of Cretaceous and Paleogene age near the “Titanic Site” where the Titanic collided with an iceberg and sank at the intersection of the Gulf Stream and cold currents flowing from Greenland. The goal was to obtain climate and fossil records of past extremely warm climates to provide insight on how future global change may affect marine and terrestrial ecosystems. We obtained unusually expanded records of the Eocene and Oligocene including the peak of global warmth in the late Early Eocene through the development of glaciers in the Oligocene. A notable discovery was of iceberg-transported sediment in the late Eocene suggesting that Greenland became glaciated essentially at the same time as Antarctica.  We also obtained records of the Cretaceous-Paleogene mass extinction and impact event and the Cenomanian-Turonian oceanic anoxic event. My lab will focus on reconstructing the history of carbonate sedimentation in the North Atlantic.  We will also use the unusually well preserved fossils to study ecosystem evolution through the descent from warm climates into the ‘icehouse’ world of the Oligocene.